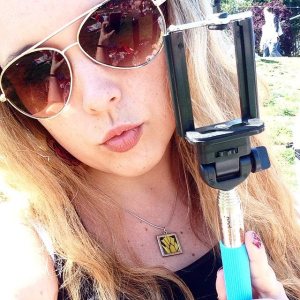 “Ugh, I hate all these engagement shots” “The only work out of yours I want to hear about is NONE OF THEM.” “I don’t need to see a million pictures of your baby!” “Seriously, fuck your yoga pants and Uggs.” “There’s an app that replaces ____ photos with cats, thank GOD!” “Anyone who uses a selfie stick is a narcissistic imbecile.” “Why the hell do you need to post so many pictures of your food? WHO CARES??” “Do these people not realize they look like idiots doing xyz??” “All these vapid bitches posting selfies need to cut it out.” “Post one more picture of ___ and you’re deleted!”–Where did all this negativity come from? And would you ever say it to the person’s face you’re referring to, if there wasn’t a screen between you? Can you look me in the eye and say “your face pisses me off” because I happened to feel good about my hair for once in a long time and wanted to post a picture of it? I feel like I’ve seen this a lot in my feed, in a lot of different iterations, and it makes me feel deeply sad.

if you’re my friend, even just my Facebook friend, or someone I’m following on Instagram/Twitter/etc, we’re connected in some way. I care about you somehow, I followed you for a reason. And when you’re happy, I’m happy for you. If you’re feeling hot today and want to snap a picture of your outfit or makeup job, that’s wonderful. If you’re on vacation and want to take a pic of, and in front of, every dang tourist trap there is? Go for it! You’re having fun! Want to post a picture of the tasty food you’re eating? I’m super jealous, but excited you’re being adventurous with your food–always a cool thing! If there’s a smile on your face, I’m smiling with you. Even if you’re posting ten pictures a day of paperclips, if it makes you happy and you’re not hurting anyone–rock the fuck on.

At times sure, I’ve felt like “oh boy, EVERYONE is getting married, huh?” but those tended to be times when I, myself, felt lonely. Annoyed that I’ve seen far too many duck lips with a bar background? I’m probably feeling cooped up in my house and wishing I was out with my friends. Babies everywhere? It’s typically when I miss seeing my friends whose busy lives as parents make me feel a little less important because I don’t see them as often. OR I’m wondering if I’ll ever be in a place to have children. Pouty pictures where you’re looking up at your phone in switched screen mode? Silly, but nothing to scoff at for sure, and damn I’m probably wishing I had that eyeliner game.

The catty vitriol that I’ve seen in my feed lately, and the gleeful agreement that chimes in with even more put downs has me disappointed in us as humans and how we treat each other when we think there are no consequences. For every person that agreed that “no one wants to see your fat ass in yoga pants,” how many more were feeling ashamed at that picture they posted in a happy moment when they felt good about themselves? I know I have had that feeling of shame, multiple times, when seeing these criticisms in my feed (after my engagement, the sting of friends saying “UGH EVERYONE IS GETTING MARRIED”, after I posted about going to the gym “STOP POSTING ABOUT THE GYM NO ONE CARESSS” “Saw so many stupid sluts wearing MAKEUP at the GYM can you BELIEVE IT??” after my new recipe, “UGH NO ONE WANTS TO SEE PICTURES OF YOUR FOOD” after my vacation, “SELFIES ARE SO DUMB” not necessarily directed at me, but also hurtful because I knew they could be applied to me). Aside from that recent lip challenge that left girls’ faces bruised or perhaps trends that legitimately hurt people (planking… oh boy those made me uncomfortable…), why do you feel compelled to bash something that makes someone, even a friend of a friend, *happy*? I just don’t get it.

I post a lot of selfies. As a blogger, I always need to be active on social media in some capacity, and if I’m tagging the lipstick I’m wearing or the coffee I’m drinking there’s probably a reason behind it (trying to stay visible to brands for potential partnerships, showing my readers who come to me for suggestions what I recommend). I am probably the biggest offender for many of these “people who do ____ are idiots” complaints on my friends’ list, though no one has ever actually brought this up to my face I am under no illusion that I’m exempt from these rants. Maybe I’m a little vain. I like pictures where I look pretty, and I’ll admit that freely, because I’ve never quite FELT pretty in real life. I’d challenge anyone to say they DON’T appreciate a picture that made them feel good about themself, especially if they typically feel unattractive or invisible. My self esteem is  pretty damn low as a general rule. A like on a photo might boost my confidence just a tiny bit, and maybe in that moment, it’s what I need. I see the same slew of duck faces in my feed that you all do, the same pictures of happy couples and babies and exotic vacations I can only hope to go on. Sure, I get jealous on occasion. But mostly, I get happy for my friends. Because… isn’t that what friends do?

No one ever deserves to be put down for things that make them happy. Especially from people who are their friends, even if only by way of social media. And there’s a big, big difference between posting a picture that makes you feel good, and posting a bunch only for attention–and even then, you can never be sure of the intent.

There are so many reasons to feel bad about oneself, and way too many reasons to feel put down, unpretty, out of place. The circle you create for yourself shouldn’t be one of those places bringing you down. No picture that contains a smile should make the person feel shameful because someone else thinks they should have kept their phone in their pocket.

I think the world would be a much better place if we were just a little bit kinder to each other, whether we’re hiding behind a screen or not.

3 thoughts on “Another Defense of the Selfie, and All the Forms It May Take”